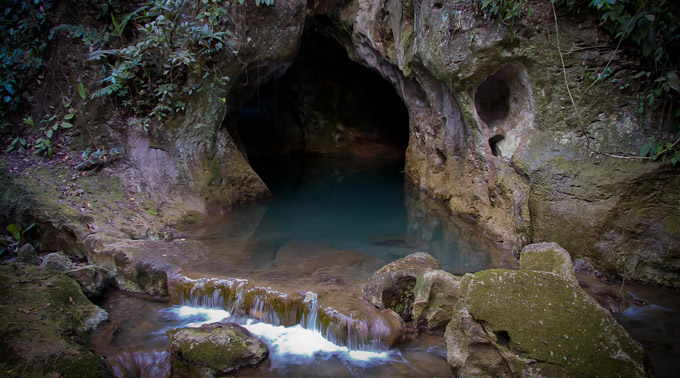 Ranked the number one sacred cave site in the world by National Geographic Society in 2012, Actun Tunichil Muknal, whose English translation means Cave of the Stone Sepulcher, is one of the premier tourist destinations in Belize. During the last 15 years, the site has been featured in numerous, world-class television documentaries and magazines like National Geographic Explorer, the History Channel, Discovery Channel, the BBC, NBC, plus on Australian, Austrian, French, German, and Taiwanese television stations to name a few, and it is the most visited cave site in the Mundo Maya.

Located in the Cayo District, Actun Tunichil Muknal (or ATM for short) was first discovered in 1989. The cave was subsequently investigated, between 1993 and 1999, by a team of Belizean and North American archaeologists under the direction of the author. Today Actun Tunichil Muknal is akin to a living museum. It is one of the few places in the Maya world where artifacts and victims of sacrifice that were left inside the cave more than a thousand years ago can still be viewed in their original contexts rather than in glass cases.

Actun Tunichil Muknal is approximately five kilometers in length and has a perennially active stream which flows through the major cave passage. The main (or downstream) entrance to the cave resembles a double Gothic archway with a beautiful, deep-blue pool below. The South Entrance is located at the other end of the cave, at the point where the stream enters the cavern. Like most cave sites in Belize, ATM was formed within the karstic limestone foothills that encircle the prominent highlands of the Maya Mountains. Today the site is but one example of thousands of caves that have formed in Belize during the last several million years.

Archaeological research has determined that the prehistoric Maya first began to visit ATM around 300 to 600 A.D. During this time the Maya primarily utilized the entrance to the cave for most of their ritual activities. But it wasn’t until much later, between 700 and 900 A.D., that they begun to penetrate deeper into the cavern to conduct ceremonies. By this time at least four major sections of the cave were used for cultural activities. These locations included the “Entrance Chamber,” the “Sinkhole Entrance,” the “Stelae Chamber,” and the “Burial Chamber.” Of these four areas, the last two produced the most intriguing information on ancient Maya cave utilization. It is also here that visitors have the unique opportunity to travel into the past and to share the netherworld experience of the Maya who utilized this magnificent cave more than a thousand years ago.

Today, as in the past, the most breathtaking and enchanting part of the site is the Main Chamber. Located approximately one kilometer from the entrance, this large, beautiful chamber, adorned by nature with sparkling stalactites and stalagmites, contains the skeletal remains of 14 individuals, approximately 150 ceramic vessels, and several ground stone artifacts. Of the 14 skeletons in the chamber, six are infants under the age of three years, one is a child of roughly seven years of age, and the remaining seven are adults ranging in age from their early twenties to approximately 48 years old. One of the adults, a young male, lies encrusted in sparkling travertine deposits and provides a spellbinding example of the fragile nature of human existence. The skulls of at least five adults, and the child, have evidence of cranial modification. Interestingly, the child and all of the infants also show evidence of trauma to their crania. This suggests that their death may have been caused by blows to their heads. Nearly all the skeletons were located in natural depressions and travertine pools which occasionally flood during the height of the rainy season. None of the 14 individuals, however, were buried. Instead, they were found lying on the cave floor with no associated grave goods. This mode of interment and the context in which the skeletons were discovered strongly suggest that all the individuals most likely represent victims of human sacrifice.

More than 80% of the ceramic vessels in ATM are large jars and bowls, and almost all the pots are broken. We know from other sites in the region that these vessels may have originally contained food offerings. In cave sites where the preservation of organic remains is excellent, archaeologists have discovered corn, chilli pepper, cacao, and copal incense inside of ceramic vessels. The corn, pepper, and
cacao were taken into the caves as offerings to the gods and to deceased ancestors. The copal incense was generally burnt during celebration of the cave rituals.

The stone tools in the cave include two basic types, grinding stones and hoes. Known as manos and metates, the grinding stones were used for processing corn. The hoes were used to till the soil. Both of these implements are associated with food production and lend support to the argument that most cave rituals focused on themes of agricultural fertility.

In Maya religion and cosmology, few locations are considered to be more sacred and ritually charged than caves. Representing portals to the underworld and places of origin, these dark subterranean sites served as the home for important, powerful, and often capricious gods. In the Popul Vuh, a sacred Maya book that was translated in the 16th century, it is the Underworld gods who are responsible for the creation of the world. These same gods are revered in Maya culture as deities that promote rain and as earth gods associated with fertility. The earth lords who reside in caves beneath sacred mountains are the owners of the land, the forests, and all animals, and humans are expected to petition them for these resources. The Maya therefore journeyed to caves to communicate with their gods and ancestral spirits. They went to request that the rain god Chac nourish their crops, that the earth gods provide them luck in the hunt, and that their harvests be bountiful. As part of their rituals they would burn copal incense, give their blood in offering, and, in more desperate times, even provide sacrificial victims to ensure continued sustenance and agricultural fertility.

Because ATM and a few other cave sites are accessible to the public, Belizeans and foreign visitors have a rare opportunity to visit these truly breathtaking, beautiful, and unique caverns. Like all subterranean sites, however, caves like ATM are very fragile with sensitive environments. It is, therefore, our collective responsibility to protect them from destruction and to preserve them so that future generations can appreciate their beauty and splendor.

For more information about the Actun Tunichil Muknal Cave Tour, please email us at [email protected]

Vacations starting at $95Per Night