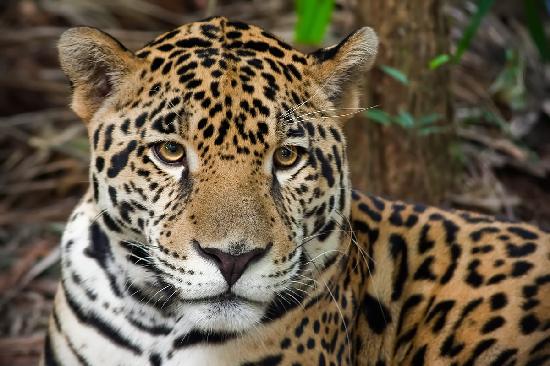 Of the five native species of big cats prowling the Belizean jungle, it is the elusive and magnificent jaguar that everyone touring Belize wants to see. It is only a very lucky few who have actually seen any of these beautiful feline predators in the wild.

One of the largest of the Central American carnivores, it was once fairly common in coastal mangroves, lowland savannas, and wet and dry shrub lands and forest up to about 3000 ft. elevation. But because its conspicuous tracks, the high value of its pelt, its reputation as a stock killer, and its vulnerability to hound pursuit and still hunting, this cat is now rare except in parts of large unhunted reserves.

Jaguars are rarely seen in daylight, but occasionally one suns on a cliff or log. They are fairly aquatic and easily swim rivers, small lakes, and straits between mangrove

islets. They favor damp sites such as streambeds in gallery forests, where footprints often reveal jaguar’s presence. At any season jaguars of any sex may roar at night.

Although jaguars seem to prefer peccaries as prey, they also take monkeys, agoutis, deer, birds, fish, lizard, turtles, and other animals. Mud tracks reveal feeding on dead fish, alligators, iguanas and any other carrion left by receding waters. Jaguars seem not to avoid the scent of a man, and attacks on humans are rare.

See: The Beauty of Belize

There’s an aura of mystery and superstition about jaguars. Locals speak of the big cat with reverence. To indigenous Maya the jaguar is simply called baalum, meaning “king”. Its likeness is carved on stone ruins of their ancient civilization throughout Belize. The jaguar they worshipped once occupied a range from the US to Argentina, but fur hunters and deforestation reduced that to a few hundred in Central America’s and Brazil’s thickest rainforests. The Cockscomb Basin Wildlife Sanctuary in Belize is the only designated jaguar preserve in the world. 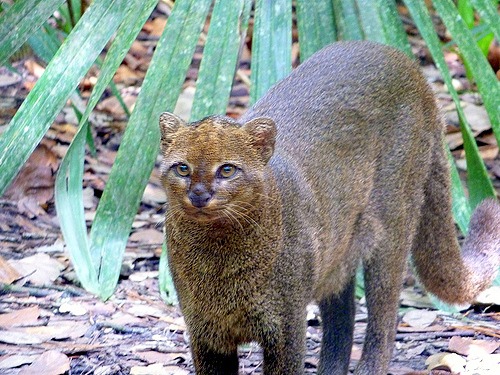 The Jaguarundi is native to Central America and the northern and central countries of South America down to Argentina. A number of jaguarondi are also to be found in Florida, although these are descendants of a small population introduced to the area in the 1940’s.

Jaguarundi live in dense shrubbery and thickets, and on the edge of forests where these cats live a life of relative safety because such thickets are almost impenetrable to both dogs and man which are their chief enemies.

They spend most of their time on the ground, but they are expert and are rarely seen on open land. They are largely active at night but move about a good deal in the daytime, often going to water at midday.

The Jaguarundi is a small cat, with a long tail, short legs, small round ears, and a slender body. Its fur is short and smooth. The fur is plane with no patterning, though it is slightly lighter on the underside. They are almost black, grey, brown, or fox-red. The darker colors are more likely to be found in rainforest regions, and the paler colors in drier regions. Newborns have spots on their coats.

They primarily feed on of rats, mice, birds, and rabbits 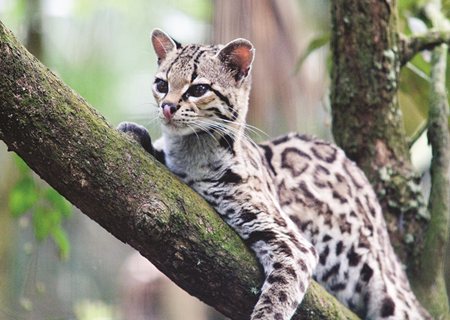 The Margay, also known as the Long Tailed Spotted Cat, is similar in appearance to the Ocelot. Its body however is smaller, with longer legs and tail.

The range of the margay extends from Mexico down through Peru, parts of Paraguay to the northern areas of Argentina. The margay lives exclusively in forested areas and is the most accomplished climber of all its fellow cats. Totally at home in the branches, it has specially adapted claws and ankle joints which can move through 180 degrees, enabling it to move with almost monkey like ease amongst the tree

tops. Its agility is demonstrated by the apparent ease at which the cat can scamper down the trunks of trees head first and run upside down beneath branches.

The margay hunts almost exclusively by night and its prey includes birds, small monkeys, tree frogs and insects which inhabit the forest. 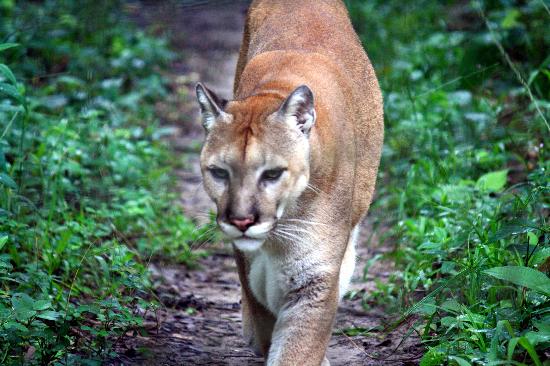 Mountain lions are also called cougars, panthers, catamounts, and in Belize pumas. They are the largest wild cats in Central America. These solitary animals avoid people if they can. Their primary prey is deer, but they do eat porcupines, raccoons, birds, small mammals, foxes, mice, and grass. They are good climbers and can leap more than 20 feet up into a tree from a standstill. They can jump to the ground from as high as 60 feet up a tree.

A single male lion may require up to 175 square miles of territory for its home range. They prefer wild areas frequented by deer. One lion will consume about one deer per week. A lion will cover the remains of its prey and return to the kill to feed until the meat begins to turn. If you find a lion kill, don’t hang around the area. The animal may still be nearby. An adult can weigh up to 200 pounds. 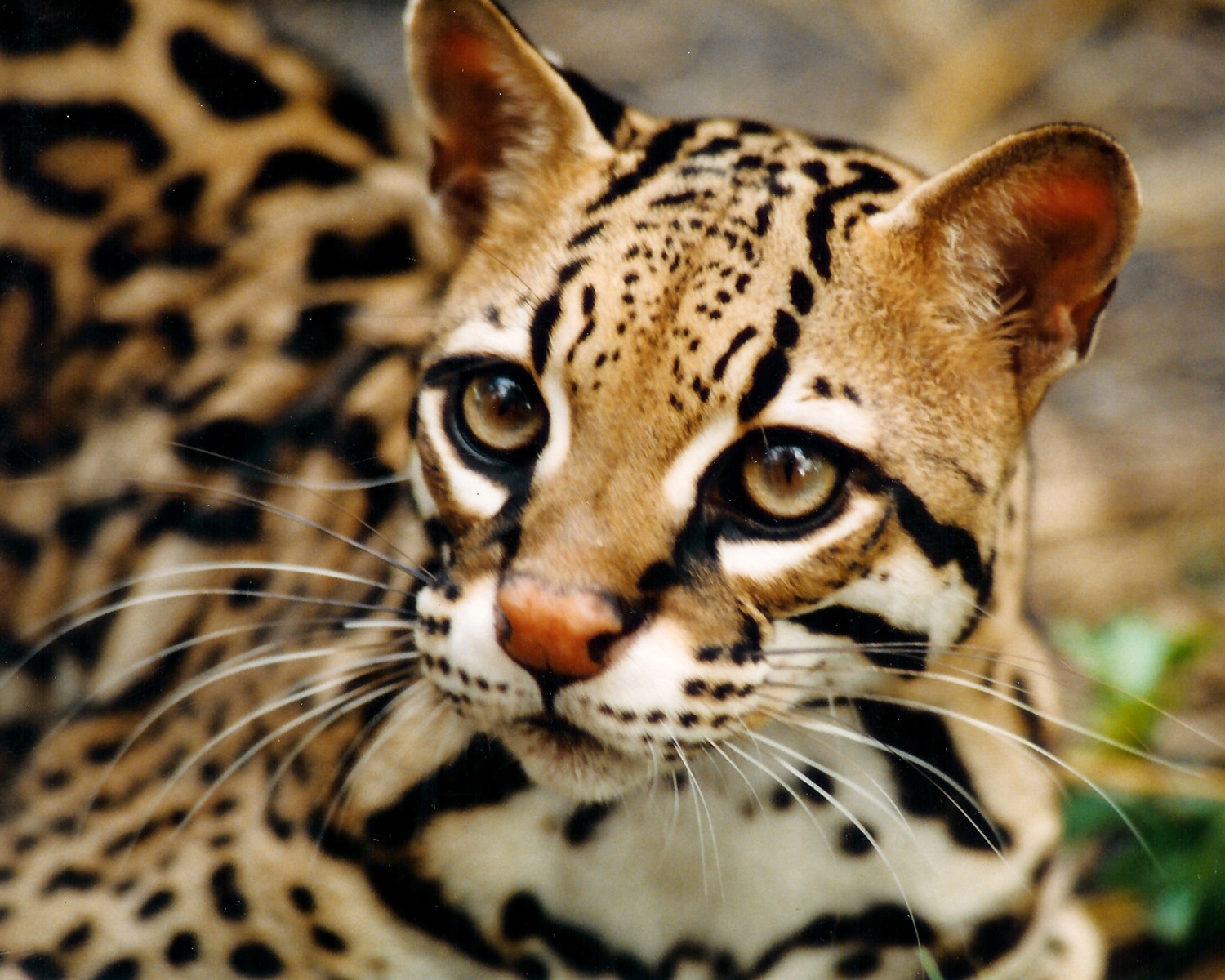 Ocelots is the most commonly seen of all the cats in Belize. The name “ocelot” comes from the Mexican Aztec word “tlalocelot” meaning field tiger. They are nocturnal and diurnal. Found in all tropical forests, ocelots feed mainly on the ground and rarely climb trees though they are excellent climbers. They tend to hunt along open trails at night and stay hidden during the day within the deeper bush. They can be found in a variety of habitats in Belize, from dry scrub to the dense forests.

Ocelots feed on small mammals, birds, reptiles and insects. The Belizean name for the ocelot is ”tiger cat”.

Cahal Pech Village Resort Has Been Certified As A Belize Gold Standard Hotel. We Are Opened With Enhanced Protocols. Learn More